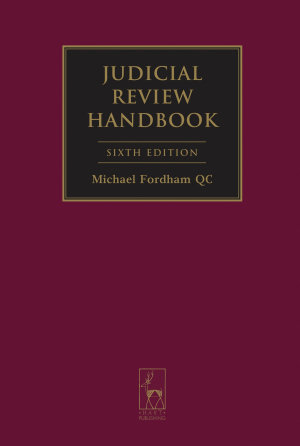 Get BOOK
Writing in the sixth edition of this Handbook, author Michael Fordham described his ambition when writing the first edition (and indeed all subsequent editions) of this book as "to read as many judicial review cases as I could and to try to extract, classify and present illustrations and statements of principle". Behind this aim lay the practitioner's overwhelming need to know and understand the case-law. Without it, as Fordham says "much can be achieved in public law through instinct, experience and familiarity with general principles which are broad, flexible and designed to accord with common sense". But with knowledge of the case law comes the vital ability to be able to point to and rely on an authoritative statement of principle and working illustration. Knowing the case-law is crucial: "the challenge is to find it". This, the sixth edition of the Handbook, continues the tradition established by earlier editions, in rendering the voluminous case-law accessible and knowable. This Handbook remains an indispensable source of reference and a guide to the case-law in judicial review. Established as an essential part of the library of any practitioner engaged in public law cases, the Judicial Review Handbook offers unrivalled coverage of administrative law, including, but not confined to, the work of the Administrative Court and its procedures. Once again completely revised and up-dated, the sixth edition approximates to a restatement of the law of judicial review, organised around 63 legal principles, each supported by a comprehensive presentation of the sources and an unequalled selection of reported case quotations. It also includes essential procedural rules, forms and guidance issued by the Administrative Court. As in the previous edition, both the Civil Procedure Rules and Human Rights Act 1998 feature prominently as major influences on the shaping of the case-law. Their impact, and the plethora of cases which explore their meaning and application, were fully analysed and evaluated in the previous edition, but this time around their importance has grown exponentially and is reflected in even greater attention being given to their respective roles. Attention is also given to another new development - the coming into existence of the Supreme Court. Here Michael Fordham casts an experienced eye over the Court's work in the area of judicial review, and assesses the early signs from a Court that is expected to be one of the key influences in the development of judicial review in the modern era. The author, a leading member of the English public law bar, has been involved in many of the leading judicial review cases in recent years and is the founding editor of the Judicial Review journal. "...an institution for those who practise public law...it has the authority that comes from being compiled by an author of singular distinction". (Lord Woolf, from the Foreword to the Fifth Edition) 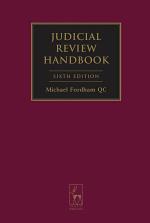 Authors: Michael Fordham QC
Categories: Law
Writing in the sixth edition of this Handbook, author Michael Fordham described his ambition when writing the first edition (and indeed all subsequent editions) of this book as "to read as many judicial review cases as I could and to try to extract, classify and present illustrations and statements of 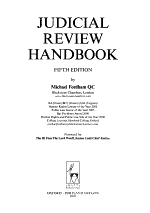