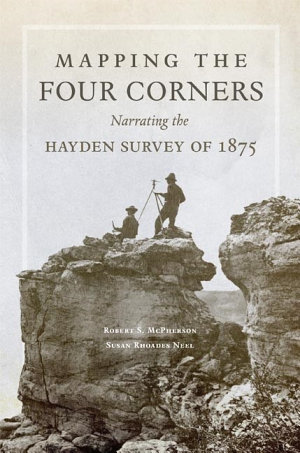 Get BOOK
In 1875, a team of cartographers, geologists, and scientists under the direction of Ferdinand V. Hayden entered the Four Corners area for what they thought would be a calm summer’s work completing a previous survey. Their accomplishments would go down in history as one of the great American surveying expeditions of the nineteenth century. By skillfully weaving the surveyors’ diary entries, field notes, and correspondence with newspaper accounts, historians Robert S. McPherson and Susan Rhoades Neel bring the Hayden Survey to life. Mapping the Four Corners provides an entertaining, engaging narrative of the team’s experiences, contextualized with a thoughtful introduction and conclusion. Accompanied by the great photographer William Henry Jackson, Hayden’s team quickly found their trip to be more challenging than expected. The travelers describe wrangling half-wild pack mules, trying to sleep in rain-soaked blankets, and making tea from muddy, alkaline water. Along the way, they encountered diverse peoples, evidence of prehistoric civilizations, and spectacular scenery—Hispanic villages in Colorado and New Mexico; Mesa Verde, Hovenweep, and other Anasazi sites; and the Hopi mesas. Not everyone they met was glad to see them: in southeastern Utah surveyors fought and escaped a band of Utes and Paiutes who recognized that the survey meant dispossession from their homeland. Hayden saw his expedition as a scientific endeavor focused on geology, geographic description, cartographic accuracy, and even ethnography, but the search for economic potential was a significant underlying motive. As this book shows, these pragmatic scientists were on the lookout for gold beneath every rock, grazing lands in every valley, and economic opportunity around each bend in the trail. The Hayden Survey ultimately shaped the American imagination in contradictory ways, solidifying the idea of “progress”—and government funding of its pursuit—while also revealing, via Jackson’s photographs, a landscape with a beauty hitherto unknown and unimagined.