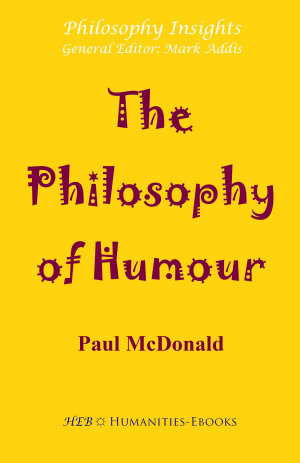 Get BOOK
Comic novelist and critic Paul McDonald explores the philosophy of humour in a book that will appeal to philosophers and creative writers alike. One aim of this book is to assess theories of humour and laughter. It concentrates mainly on philosophical approaches to humour- including those of Plato, Aristotle, Cicero, Descartes, Hobbes, Bergson, Kant, Schopenhauer, Kierkegaard, Freud and Bakhtin, but also explores such fields as cultural studies, literary theory, religion, psychoanalysis, and psychology; this broad focus makes for a richer account of humour, its relationship with philosophical thought, and its bearing on the human condition. Readers are invited to engage in creative writing exercises designed to exploit this crucial facet of humour, and to help them explore relevant issues imaginatively. In this way they will deepen their understanding of those issues, whilst at the same time cultivating their own creative skills. REVIEW COMMENT "The philosophical study of humour has a complex and fitful history: few people have been brave enough to write about humour seriously, and those who have tend to disagree with one another. For those seeking an entry point, Paul McDonald’s The Philosophy of Humour (2012) gives a useful overview of the major theories. There are those who believe that laughter derives from a sense of superiority (Hobbes and Bergson) or from a sense of relief, or release of energy (Freud’s “economy of psychic expenditure”). But the earliest, most primal examples of humour all seem to have some sort of incongruity at their heart. McDonald gives the example of “the Lion Man figure found in 1939 in the Swabian Alps”, which is thought to be about 35,000 years old. Having the body of a lion and the legs of a man, it is thought to be one of the earliest examples of represented incongruity, dating from the time when human beings first developed “an ability to juxtapose disparate concepts”. Jonathan Coe, The Guardian.