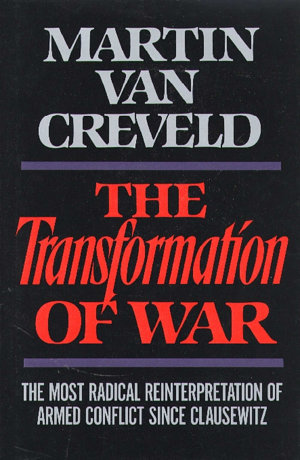 Get BOOK
At a time when unprecedented change in international affairs is forcing governments, citizens, and armed forces everywhere to re-assess the question of whether military solutions to political problems are possible any longer, Martin van Creveld has written an audacious searching examination of the nature of war and of its radical transformation in our own time. For 200 years, military theory and strategy have been guided by the Clausewitzian assumption that war is rational - a reflection of national interest and an extension of politics by other means. However, van Creveld argues, the overwhelming pattern of conflict in the post-1945 world no longer yields fully to rational analysis. In fact, strategic planning based on such calculations is, and will continue to be, unrelated to current realities. Small-scale military eruptions around the globe have demonstrated new forms of warfare with a different cast of characters - guerilla armies, terrorists, and bandits - pursuing diverse goals by violent means with the most primitive to the most sophisticated weapons. Although these warriors and their tactics testify to the end of conventional war as we've known it, the public and the military in the developed world continue to contemplate organized violence as conflict between the super powers. At this moment, armed conflicts of the type van Creveld describes are occurring throughout the world. From Lebanon to Cambodia, from Sri Lanka and the Philippines to El Salvador, the Persian Gulf, and the strife-torn nations of Eastern Europe, violent confrontations confirm a new model of warfare in which tribal, ethnic, and religious factions do battle without high-tech weapons or state-supported armies and resources. This low-intensity conflict challenges existing distinctions between civilian and solder, individual crime and organized violence, terrorism and war. In the present global atmosphere, practices that for three centuries have been considered uncivilized, such as capturing civilians or even entire communities for ransom, have begun to reappear. Pursuing bold and provocative paths of inquiry, van Creveld posits the inadequacies of our most basic ideas as to who fights wars and why and broaches the inevitability of man's need to "play" at war. In turn brilliant and infuriating, this challenge to our thinking and planning current and future military encounters is one of the most important books on war we are likely to read in our lifetime.